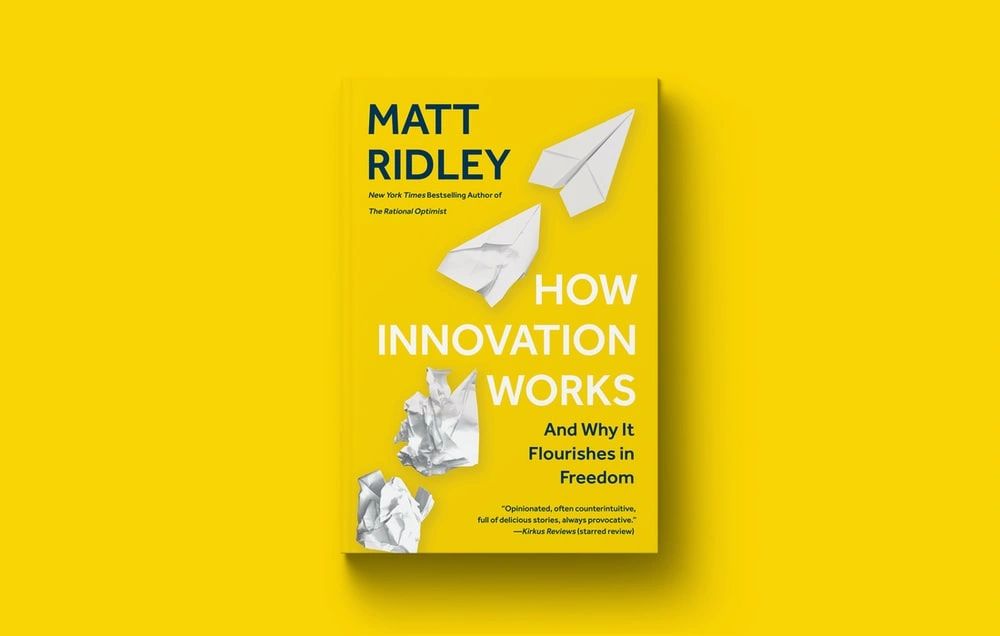 The recently published book “How Innovation Works and Why It Flourishes in Freedom” by Matt Ridley is a gem. It is full of illustrative historical stories that makes its reading quite enjoyable.

“Innovation, like evolution, is a process of constantly discovering ways of rearranging the world into forms that are unlikely to arise by chance – and that happen to be useful. The resulting entities are the opposite of entropy: they are more ordered, less random, than their ingredients were before. And innovation is potentially infinite because if it runs out of new things to do, it can always find ways to do the same things more quickly or for less energy”.

“Innovation is the most important fact about the modern world, but one of the least well understood. It is the reason most people today live lives of prosperity and wisdom compared with their ancestors”. Innovation is why our world is not recognizable in terms of the world that existed in 1800. Innovation is why we had a 2% annual compounded growth per capita for the last two centuries (a point of concern: for this ending decade, Brazil shall experience an annual compounded GDP per capita drop of 0.2%).

* Innovation is different from invention: “innovation means much more than invention, because the word implies developing an invention to the point where it catches on because it is sufficiently practical, affordable, reliable and ubiquitous… an old cartoon shows a beaver and a rabbit looking up the Hoover dam: ‘No, I didn’t build it myself,’ says the beaver. ‘But it’s based on an idea of mine.’”

* Innovation is often serendipitous: “it is a well-known attribute of innovation: accidental discovery”.

* Innovation is a team sport: “innovation always requires collaboration and sharing… It is always a collaborative phenomenon.” That is why tech-clusters, as the Silicon Valley, are so important.

* Innovation is inexorable: “simultaneous invention is more the rule than the exception. Many ideas for technology just seem to be ripe, and ready to fall from the tree… the inevitability of invention is that makes innovation looks predictable, yet it is not… technology is absurdly predictably in retrospect, wholly unpredictable in prospect”.

* Innovation involves trial and error: “fail fast and fail often, as the Silicon Valley slogan has it”.

* Innovation increasingly means using fewer resources rather than more: “the main engine of economic growth is not from using more resources, but from using innovation to do more with less”. The law of increasing returns

* Innovation cannot be forced upon unwilling consumers: “innovation must meet two tests: it must be useful to the individuals, and it must save time, energy or money in the accomplishment of some task”.

* Innovation is a bottom-up phenomenon: It owns “little or nothing to governments”. Conversely, “government prevent innovation… as always, regulation favors incumbents”.

* Innovation generally happens in just a few parts of the world at any one time. This happens, because in order to innovate, liberty and free markets are needed – the Silicon Valley effect.

“The main ingredient in the secret sauce that leads to innovation is freedom. Innovation is the child of freedom, because it is a free, creative attempt to satisfy freely expressed human desires”.

“Liberty is the parent of science and of virtue, and a nation will be great in both in proportion as it is free” Thomas Jefferson