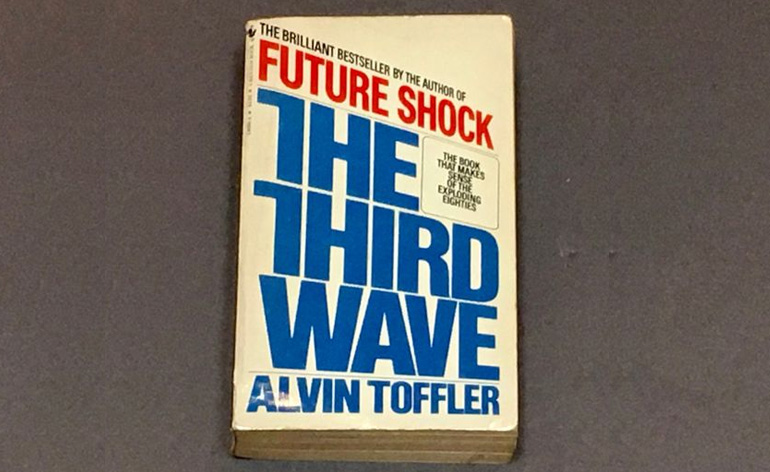 Alvin Toffler’s “The Third Wave” (1980) is a classical, one of the most influential techno books ever written. My father gifted me a copy, and it shaped my decision to study electronics, which was, at the time, “the” third wave profession.

As Toffler predicted, successful Third Wave companies no longer operate on the business models used by the Second Wave mass producers: “The Second Wave Society is industrial and based on mass production, mass distribution, mass consumption, mass education, mass media… You combine those things with standardization, centralization, concentration and synchronization, and you wind up with a style of organization we call bureaucracy”.

Up until the turn of the century, a typical Second Wave manufacturing company performed the following: it designed a product, manufactured the product, and then sold the product. The vertical in-house design/produce / sell was the winner business model.

The winning Second Wave companies followed this model at home and then abroad. Take Ford, for example, who just sparked a social stir in Terra Brasilis by its decision to leave the country after more than one century. Through massive, grotesque, and cruel to the poor subsidies, Ford was able to design, manufacture and sell outdated cars in Brazil. After all, the “cars are ours”, “the petroleum is ours”, “the computers are ours” … because of their “strategic nature”.

Obviously, platform companies such as Apple and Qualcomm, keep the high added-value activities of R&D, finance, and marketing in-house, and outsource all the rest to external providers — a made-in-China iPhone means little. Manufacturing locks up lots of capital and it is often (low-skilled) labor-intensive. A light balance sheet’ model makes more sense, since it gives more flexibility (as we can testimony in our personal lives’ experience).

The platform company business model has been catapulted by Asia’s overcapacity and it rests on the following pillars:

* Free trade, to access the best providers and prices.

* Communications, to gain visibility on the process.

* Logistics, to smoothly move goods around.

No wonder there is no Brazilian platform company, the pillars are missing. Embraer is the closer one that comes to my mind, but its financial performance refutes it: net losses in 2019 = US$217M; net losses in 2020e = over US$600M, market cap drop of 85% (in nominal terms) from the 2007 peak.

Platform companies are successful because they increase productivity.

However, platform companies’ business model is under constant attack by governments’ protectionism.

Who benefits from lower productivity?