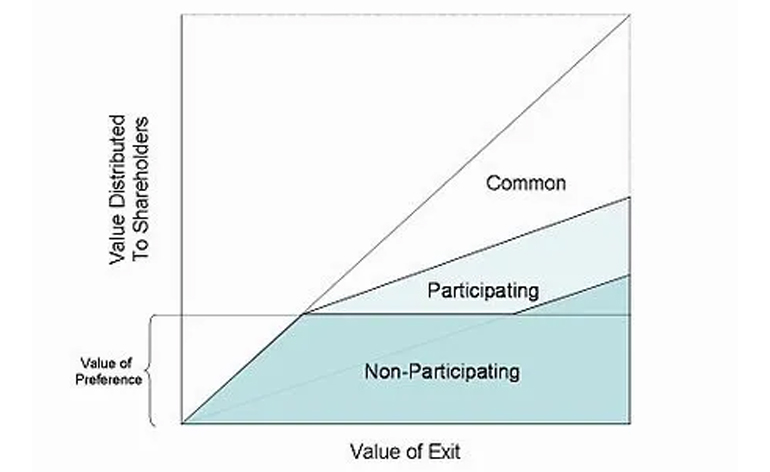 Liquidation Preference is one of the most important topics on a VC startup term sheet.

The Liquidation Preference clause determines who gets their money back — on one side the founders + the management team (the common shareholders) and, on the other side, the VC funds with preferred shares — under a liquidation event, which is usually a sale.

In the nonparticipating type, the VCs get their original investment amount back first by “Nx”, but no more. The typical value for the liquidation preference multiple (N) is 1.

In the participating type, the VCs, besides getting back their original investment first, also get to convert their shares into common and to participate in any remaining proceeds as any other shareholder -– effect known as double-dip. Given the current excess of liquidity in the US VC market, the participating type is atypical and when it happens, it happens in very early stages.

In summary, independently of the type, the liquidation preference mechanism functions as a capital protection buffer for VCs in the case of a lower liquidation event value.

To illustrate: A VC fund invested $ 2 million to own 20% of company, on a valuation of $ 10 million. If the company is sold for $ 8 million (lower than the entry valuation), the VC fund will get back:

If the startup succeeds and moves through its life cycle, it will raise multiple subsequent rounds of financing (after Series B, it is classified as Late Stage). With ever increasing valuations, the liquidation preferences of earlier stages start losing purpose -– valuations can easily go up by more than 5x between rounds.

Undoubtedly, VCs that are investing at later stages also demand for preferred stocks. However:

i) Capital is chasing good opportunities and not the other way around (just see the astronomical amount of buybacks). Thus, founders and earlier rounds VCs have the upper hand during later stage negotiations. Instead of founders against VCs, as in the early stage negotiations, founders and earlier rounds VCs sit together, at the same side of the table, down the road – there is no more conflict of incentives between them.

ii) US VC funds, learnt by experience, the importance of keeping the founders + team highly motivated in the form of owning a lot of the equity of the company. Harsh / one-sided late stage liquidation preference terms have everything to work as a time-bomb over a winning team.

Common shareholders can be really hurt by liquidation preferences in the case of early stage exits. I was hurt once, but at the time (2001) there were few VC financing options since the Brazilian capital markets were completely underdeveloped.

In later stages, on the other hand, since the negotiation power pendulum has shifted to common and earlier preferred shareholders, they will hardly be harmed by the liquidation preference chain.