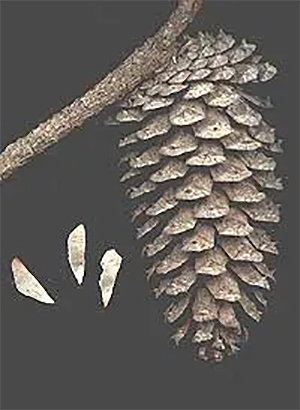 “The Dao of Capital”, by the hedge fund manager Mark Spitznagel, is one of the best ever written books on investing. Spitznagel brilliantly brings the Austrian School of Economics theory and concepts to the investment world.

The chapter “The Forest in the Pinecone – the Roundabout and the Logic of Growth” particularly hooked me.

Conifers trees – pines, araucarias, etc. — are amongst the oldest species on the planet. Conifers rank, together with cockroaches, amongst the most enduring of all living things.

Conifers’ main competitors are the flowering angiosperms. Nowadays, angiosperms dominate the plant kingdom with more than 250K varieties, from grasses to trees such as jacarandas and maples. Angiosperms have used their faster growth metabolism and rapid colonization process (with the help of flower attracted insects) to gain “market share”, especially in tropical (Amazônia) and sub-tropical (Mata Atlântica) forests.

Notwithstanding, in certain times and places, conifers beat their mighty angiosperms competitors.

1) Conifers’ rate of growth usually lags that of the angiosperms. However, this is a deceptive and calculated play: conifers fall behind early because they are assembling their “assets”, strong roots and thick barks, that will make them more efficient in the use of resources later on and, thus, live longer. Conifers, like wise investors, have a low time preference in order to be in a better position to dominate later.

3) When conifers and angiosperms grow in the same area, they compete for scarce resources – water, soil and sunlight. Because they grow faster, in direct confrontation, the odds are usually in favor of the angiosperms. The angiosperms temporary victory results in overgrown tree trunks that, like malinvestments, are especially vulnerable to fire. The temporal and “artificial” change in the ecosystem makes the forest more prone to fires. In addition, fire suppression mechanisms by foresters lead to further extension of timber-boxes trees (malinvestments). At some point, instead of “free market” small wildfires to enable the natural turnover of resources, a pretty big destructive wildfire occurs, devastating in a snap years of biomass (capital) accumulation.

4) Unlike angiosperms, conifers can grow in areas where conditions are harsher — rocky, waterlogged and other low-quality soils – in order to avoid direct competition for scarce resources. Several evolutionary adaptations made this possible: the size and shape of the conifer needles that reduce evapotranspiration; tolerance to significant temperature fluctuations; windborne and fire-resistant seeds. In an indirect manner, the growing-on-the-rocks conifers follow an intergenerational and intertemporal strategy: by surviving the competition and predators (especially fire), it empowers their descendants to one day take advantage of better growing conditions (post-wildfire) — a two-step strategy of intermediate objectives’ attainments for the pursuit of a future edge.

For conifers, growth is a patient process that takes perseverance and fortitude and demands a roundabout strategy, with slow stages that create the structure for subsequent fast and efficient development.