The Most Powerful Technology Law in History 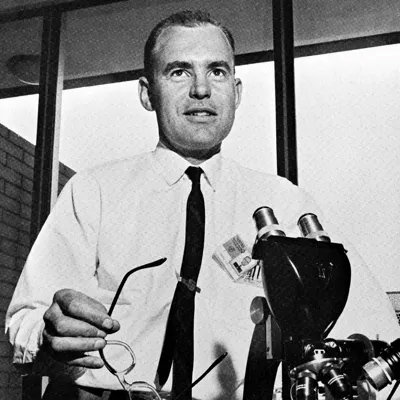 If you are interested in the digital revolution history, “The Innovators” from Walter Isaacson is an excellent book. An easy read and with plenty of inside stories of how great tech inventors and entrepreneurs turned their visionary ideas into watershed innovations and ventures.

Here, I start with the invention of the transistor at Bell Labs in 1947 by William Shockley and team. Briefly, the transistor was developed as a solid-state (semiconducting material) replacement for the vacuum tube. The semiconductor transistor could then be used as a signal amplifier or an on-off (0 and 1) switch. The first application that popularized the transistor was the pocket radio, transforming the radio from a shared living room appliance, to a personal device (a defining feature of the digital age).

In 1954, Shockley went through a midlife crisis and left Bell Labs to create Shockley Semiconductor in association with a Californian entrepreneur. For his new company, Shockley recruited eight researchers and two of them, later on, also transformed the digital history: Robert Noyce and Gordon Moore. “With his self-effacing and genial manner cloaking a precision-guided mind, Gordon Moore would become one of the most revered and beloved figures in Silicon Valley.”

Shockley wasn’t a good business leader and had ego problems that were exacerbated after he won the Nobel Prize in 1956. The working environment became so unpleasant that Moore, Noyce and the other six researchers (“the traitorous eight”) left Shockley to create a new semiconductor venture, Fairchild Semiconductor, a Fairchild’s division company, with an initial investment of US$ 1.5 million. Fairchild got the option to buy the new venture back for US$ 3 million.

In the same year that Fairchild Semiconductor was formed, 1957, the Soviets launched the Sputnik satellite initiating the space race, which would vastly demand computers and new transistor devices. All at once, the demand to cram more transistors in ever-smaller devices emerged. However, as the number of components in a circuit increases, the number of connections increases even faster; a problem coined as “the tyranny of numbers”. The compelling need to solve this problem caused the invention of the integrated circuit or microchip in two places at the same time: Texas Instruments and Fairchild Semiconductor.

Just as the microchip sales were starting to soar, Gordon Moore wrote a paper titled Cramming More Components onto Integrated Circuits” in 1965. There he made his prediction that would become celebrated as the Moore’s Law: “The complexity for minimum component costs has increased at a rate of roughly a factor of two per year” and “There is no reason to believe it will not remain nearly constant for at least 10 years.” Moore’s Law proved right in 1975, ten years later. Then, Moore modified his law by predicting that the number of transistors crammed onto a chip would show a “doubling every two years, rather than every year”. Nowadays the modified Moore’s Law states that the chip performance as well as the number of transistors doubles every 18 months. “Moore’s Law became more than just a prediction. It was also a goal for the industry, which made it partly self-fulfilling.”

Given the huge success of Fairfield Semiconductor, Fairfield’s mother company decided to exercise its call right. Moore and Noyce became rich but increasingly dissatisfied with the bureaucratic intricacies of a larger company. Next, Arthur Rock, one of the first venture capitalists of the silicon age, approached them. Soon after Moore and Noyce leave Fairchild to found Integrated Electronics Corp – Intel (what a cool name!) … The End (for now).

Fortunetaly, I have been surfing the digital revolution and enjoying Moore’s Law effects since 1982, when I began studying electronics engineering — then, an Intel 8086 processor, with 29 K transistors, was the big thing; today an Intel Core i9 has about 7 Bi transistors, a 24.1 million% jump. Nevertheless, the productivity gains impacts of Moore’s Law will not be evenly spread through society. People whose income is less governed by Moore’s Law will struggle. Any work that is sensitive to automation competition is in peril.

Nowadays, more transistors (0s and 1s switches) are annually produced than grains, worldwide. There has never been any compound growth development in humankind that has matched the pace and duration of the increasing density and performance of computer chips. We have never seen anything like this!

The great impact of Moore’s law is in the reduction of digital information costs. Data storage (memory) costs will continue to be cut. Processing and transmission costs will continue to drop. Information creation will be further decentralized. Knowledge expansion will skyrocket. Physical (solid-state) limitations regarding chips manufacturing will be overcome. New faster processing technologies, as quantum computing, will be developed. Moore’s Law will live long.